Here is some interesting information about  the FFA Club.

On Monday, May 23rd, 2016, the Crystal Lake Middle FFA was honored at the Polk County Federation Banquet. The first award was the MAD(Make a Difference) award in which Mr. Egan spear-headed a letter writing and care package for soldiers across seas. Students responded in a great way and made a difference to many men and women who are away from their families. The second award was for overall program excellence over the 2015-16 school year. Crystal Lake was the  second place high point chapter. The 59 CLMS FFA members were represented by Vice President, Michael Hickman, President Elect, Peyton Creel, and President, Kylie Hollis. The legacy continues!

On Thursday, May 5th, 2016, Crystal Lake Middle School had approximately 80 FFA members and their families celebrate an outstanding year for the chapter. Everyone enjoyed hamburgers and hot dogs grilled by Mr. Egan and crew, as well as, desserts and side dishes provided by our wonderful families. Picture to left is of our proud FFA members with their awards.

THANK YOU to Mrs. Cotter for attending and supporting us, as well as, all staff and friends who make our success possible. The following students were named as officers for the 2016-17 school year: Peyton Creel, Samantha Clemens, Elizabeth Daniels, Savannah Hackney, Jamar Wiggins, Ashton Heberling, Kennedy Sass, Hannah Hackney, Evan Haas, Darius Roller, and Jasmine Acevedo. They are already busy planning for next year! 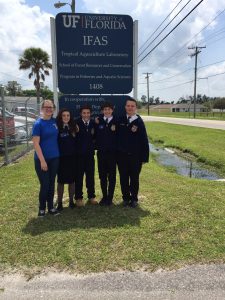 Crystal Lake Middle School FFA members continued their state level success in the Florida  FFA aquaculture CDE on Friday, April 1st, 2016.  Team members Chris Heberling, Joseph Allen, Michael Hickman, and Peyton Creel were required to identify fish, aquatic plants, and parasites as well as answer questions on water quality. The team also had to make a presentation on an aquaculture scenario. When the scores were tabulated Chris had scored the highest individual score and the team had the 2nd highest score among Florida’s best. Chris and the team will be recognized by Florida FFA  in Orlando this summer! 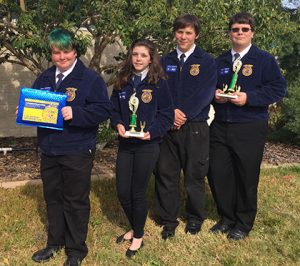 On Saturday, March 5th, 2016, CLMS FFA members traveled to the UF Education & Research Center in Apopka to compete in the state Nursery and Landscape CDE. Team members Kennedy Sass, Peyton Creel, Brandon Cardenas, and Austin Armstrong had to identify plants, tools, and disorders relating to the industry, as well as, evaluating a landscape plan and answering questions dealing with customer service. In this extremely challenging contest, the team earned the second place team award. Austin was named the competitions high individual with all members being in the top 20. These students will be honored by the Florida FFA Association at their annual convention, in Orlando, this summer. Congratulations, Crystal Lake Middle FFA!!! 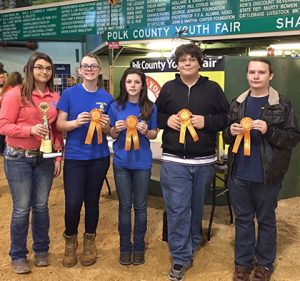 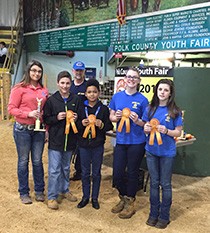 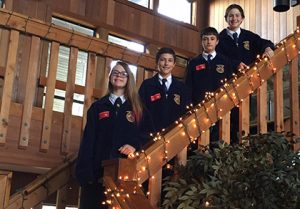 The Crystal Lake Middle School FFA Tool Identification team made school history by being named Polk County FFA runner-up at Frostproof High School on Nov. 30th, 2015, and then finishing 7th out of 53 teams in the State finals at the Leadership Training Center on Dec. 1st.  This is, by far, the best achievement in this contest by any CLMS team.  Team members had to learn the names and proper use of over 180 different tools used in the Agriscience industry!  Team members were: Joey Allen, Ashton Heberling, Christopher Heberling and Kylie Hollis.  Great job, Mustangs!! 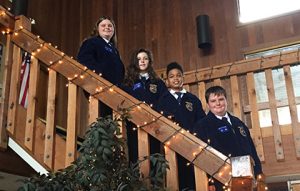 The Crystal Lake Middle School FFA Citrus team continued their winning ways by being named Polk County Champions at Frostproof High School on Thursday, Nov. 19th, 2015.  Team members traveled to the Florida Leadership Training Center on Tuesday, Dec. 1st, to compete in the State finals. After a grueling contest where students had to take a written test and identify citrus fruits, diseases, weeds and pests, the team tied for 3rd against the best in Florida.  Team members Samantha Clemens, Peyton Creel, Jamar Wiggins and Kennedy Sass will be recognized by the Florida FFA next summer at the State Convention!  Way to go, Mustangs!!

On Tuesday, September 15, 2015, Kylie Hollis (in center above), FFA President and Peyton Creel (far left above), FFA Treasurer, were interviewed on Assistant Superintendent, John Small’s radio program. They were able to share the great opportunities that they have had at CLMS and their successes. They also learned about doing a radio show and got to meet D.J. Sara Michaels from 97 Country!

On Friday, May 8th, 2015, the Crystal Lake Middle School FFA participated in the Florida FFA Aquaculture Career Development Event at the University of Florida Aquaculture Research Center in Ruskin, Florida.  Team members had to complete a written test, identify species of fish and aquatic plants, identify fish anatomy, troubleshoot an aquaculture system, and give an oral presentation. At the end of the event, the CLMS team was named State Champion!  Kylie Hollis earned the top individual award with Johnnie Salter in second, just 4 points behind. Gavin Ybarra and Andrea Moreno completed this awesome team! Special thanks go to Mrs. Mallison and Michael Chantharasinh for their work in preparing the team.

On Saturday, April 11th, 2015, CLMS FFA members were early-risers traveling to the University of Florida to compete in the State Poultry Evaluation Career Development Event.  Team members had to take a written test, grade interior and exterior eggs, grade chicken carcasses, and identify the retail cuts of poultry.  The team’s hard work paid off as they achieved the highest team score against some very tough competition. Team members(Above left to right) Austin Armstrong, Mya Woodard-DeWitt, Michael Chantharasinh, and Michael Hickman will be honored as state champions at the organization’s convention this summer.  CLMS couldn’t be PROUDER!  Way to go, FFA and Mr. West!!!

In one of the FFA’s most competitive events, CLMS FFA members had their best ever showing at the Florida Strawberry Festival on Friday, March 6th 2015.  The team of Kenna Marsh, Peyton Creel, Johnnie Salter, and Michael Chantharasinh (LtoR above) placed 11th out of 49 teams from around the state.  Team members had to identify breeds of livestock, identify wholesale cuts of meat and evaluate classes of beef and swine. Kenna had the teams highest score placing 9th out of 188 students!  Excellent job, Mustangs!

For the 5th straight year CLMS FFA members are among the top in the state in the landscape and nursery CDE!  Andrea Moreno, Austin Armstrong, Michael Chantharasinh, and Mya Woodard-DeWitt (State officer, Jana Caraiccilio, shown with CLMS students pictured LtoR above) competed on Saturday, March 7th, 2015 at the University of Florida Research Center in Apopka.  The team placed 4th and will be recognized at the state convention in Orlando this summer as being one of Florida FFA’s best!  Congrats to the team!!